These little roasted tomatoes are a big favourite of mine. I scatter them on salads, stuff them into sandwiches and nibble them straight out of the fridge when I’m wondering what to cook for dinner. They’re also really easy to make and cheaper than buying jars of sundried tomatoes. You could make them with larger tomatoes too but just keep an eye on them in the oven to check how they’re getting on as they will most likely take a little longer to dry out.

It’s a great way of using up a glut of tomatoes if you grow your own (not me) or when they’re selling them for a bargain at the market by the bowlful (me). They keep well in the fridge in a covered container but I have also packed them tightly into a small jar along with a few peeled garlic cloves and then topped up the jar with olive oil. It means the tomatoes keep for longer, and get a nice garlicky kick. Then when they’re used up you can used the garlic-tomato infused oil for salad dressings and such.

You can vary the fresh herbs used, or leave them out entirely – they’re still great on their own so don’t let lack of herbs put you off making them! I used oregano in the pictures here but basil, rosemary and thyme would all also work well. I also like to add a sprinkle of chilli flakes to give a gentle heat but again this is down to your own tastes. 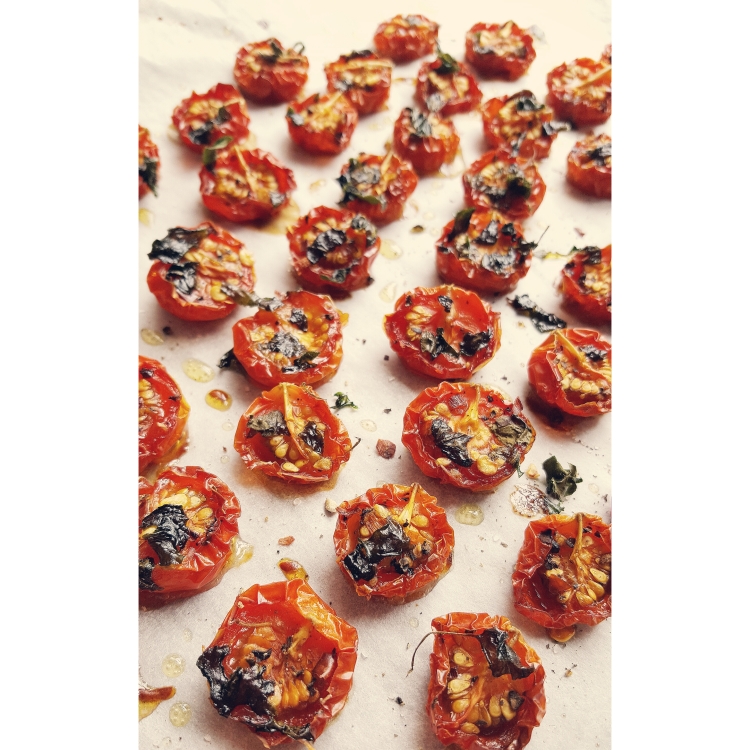