I’m not quite sure how it’s happened but suddenly it’s less than a week ’til Christmas!! I suppose when you start a business and spend 98% of your spare time making cheese the days and weeks just fly by without notice! Luckily I had a head start on getting into the festive spirit as at the beginning of November I was invited to an amazing evening by John Lewis to make my very own vegan Christmas pudding. The event was to celebrate the Victorian tradition of Stir Up Sunday, a day where everyone would come together to help make the Christmas pudding. You can read more on the history of the tradition on the John Lewis post here.

If you think it’s too late to make your own Christmas pudding then never fear.. Below is a recipe for vegan Christmas puddings that taste amazing freshly made. I know this for a fact as when I got home from the event I immediately scoffed one that I had baked. It was irresistible, still warm from the oven! Yum!

Not only did we get to make 2 of own own little vegan Christmas puddings, with expert instruction from the Waitrose cookery school chefs, but we also made a delicious festive cocktail, which were we able to sip while munching on some canapés. All this before sitting down to an absolutely incredible, Italian inspired, Christmas feast. The event was not just for vegans and John Lewis had also invited some omni and gluten-free friends along to make their own special puddings too. However the feast that was served was all 100% plant-based and I can say, without equivocation, that it was one of the best meals I have ever eaten. As anyone that has a dietary restriction will know, you get quite used to looking at a table of food and mentally checking off  in your mind which dishes you can’t eat. So to be told that the whole delicious spread laid before us was vegan was such a wonderful gesture. No-one else appeared to bat an eyelid at the absence of animal products and I hope it may have helped changed some people’s perceptions of vegan food as bland or boring!

After the meal a beautiful goodie bag full of some amazing kitchen and cooking items was bestowed on us, in addition to our two little Christmas puddings. It was a wonderful evening so a big thank you to John Lewis for inviting me along to partake in all the Christmas cheer!!

Below is a picture of our vegan Christmas pudding from the night, followed by some of my own. I decided that with the remaining Christmas pudding I would test out a new recipe for a vegan brandy butter – and let me tell you.. it didn’t disappoint! I ended up just eating it out of the jar with a spoon for the rest of the week. It’s fine though, right? ‘Cause Christmas!

I’ve posted my recipe for brandy butter below. I must admit I wasn’t really measuring too carefully so maybe try to use your own judgement on amounts as you go.. but I thought it better to post the recipe here anyway rather than not at all. I hope you like it! 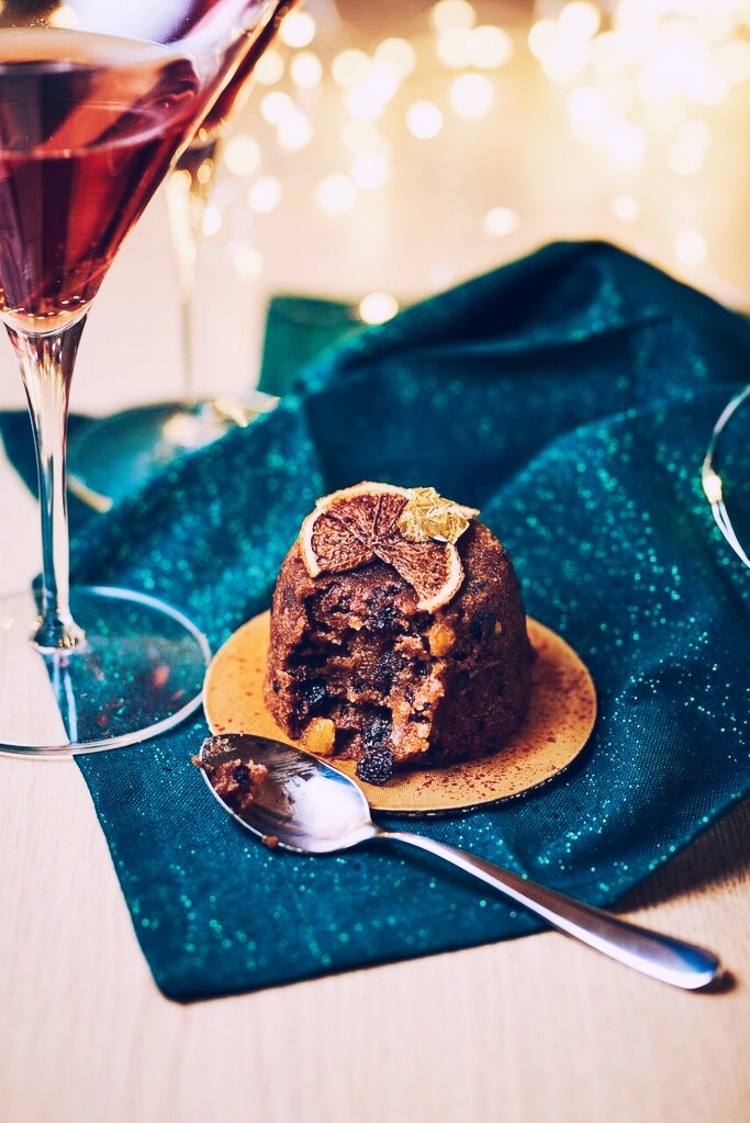 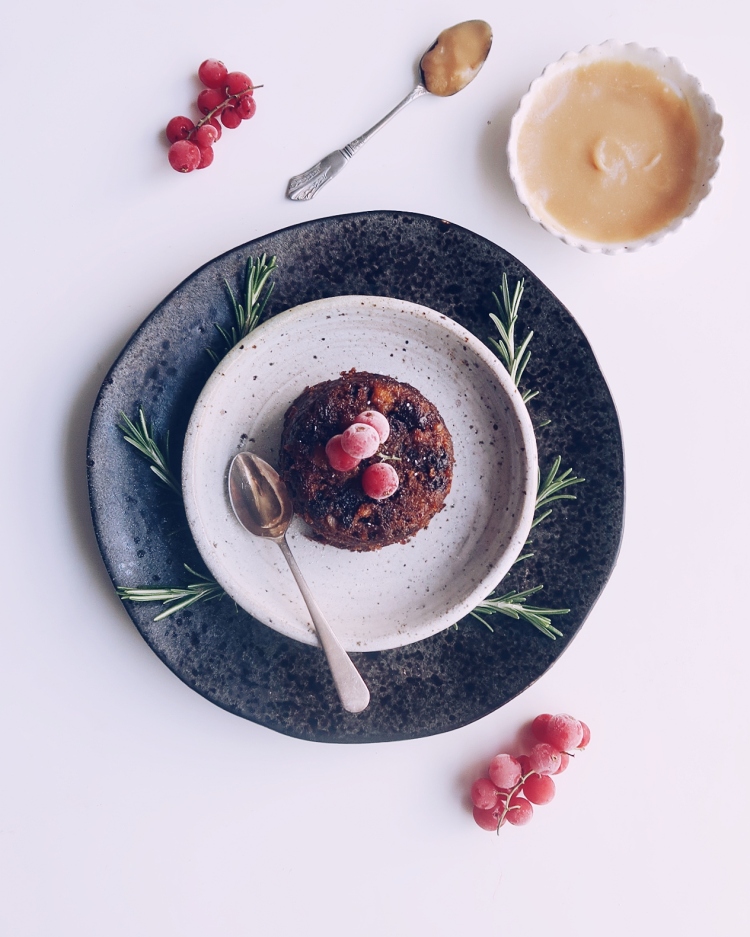 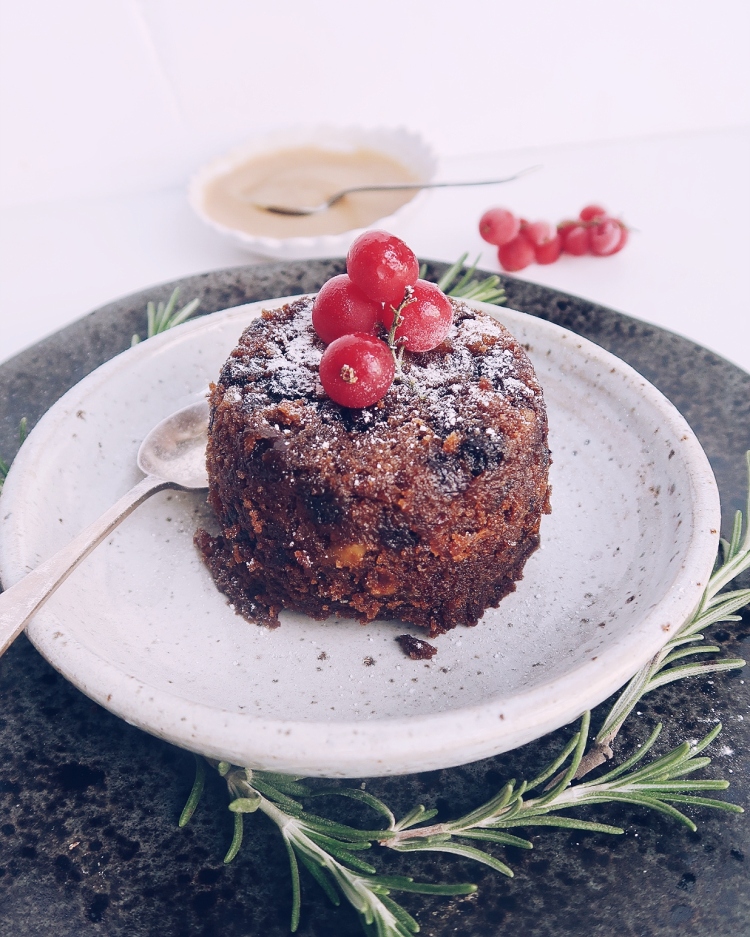 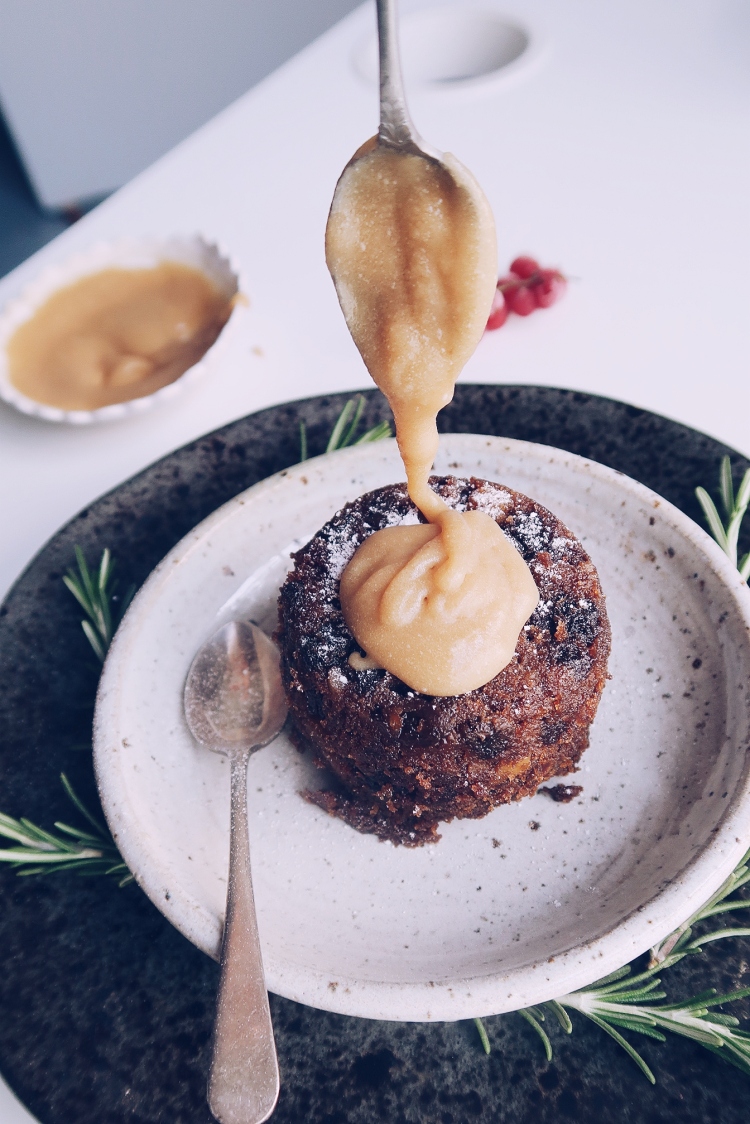 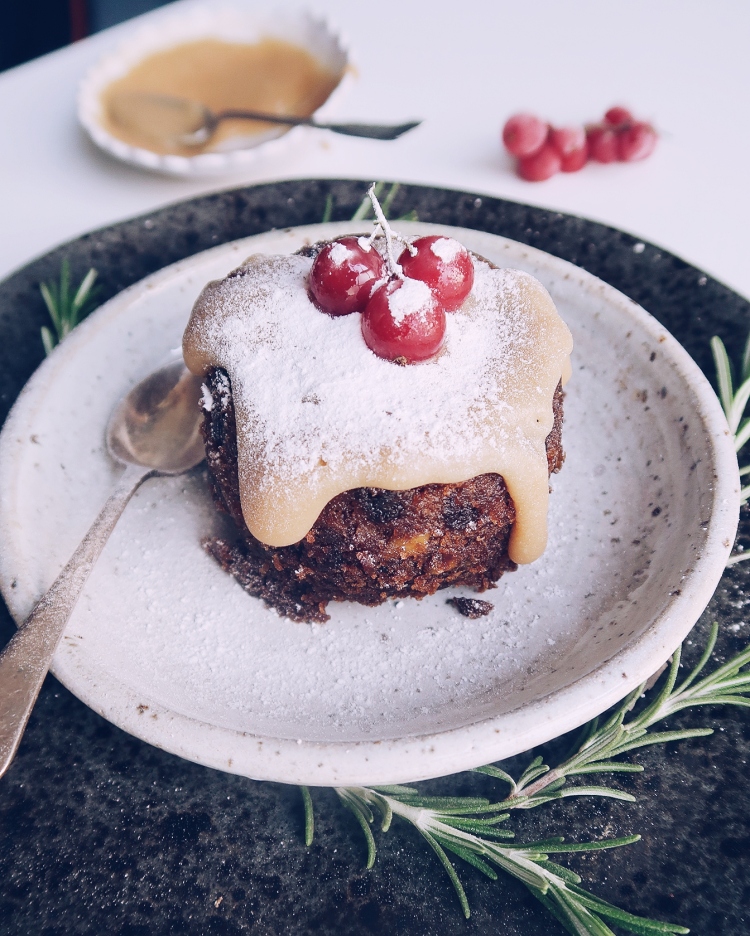 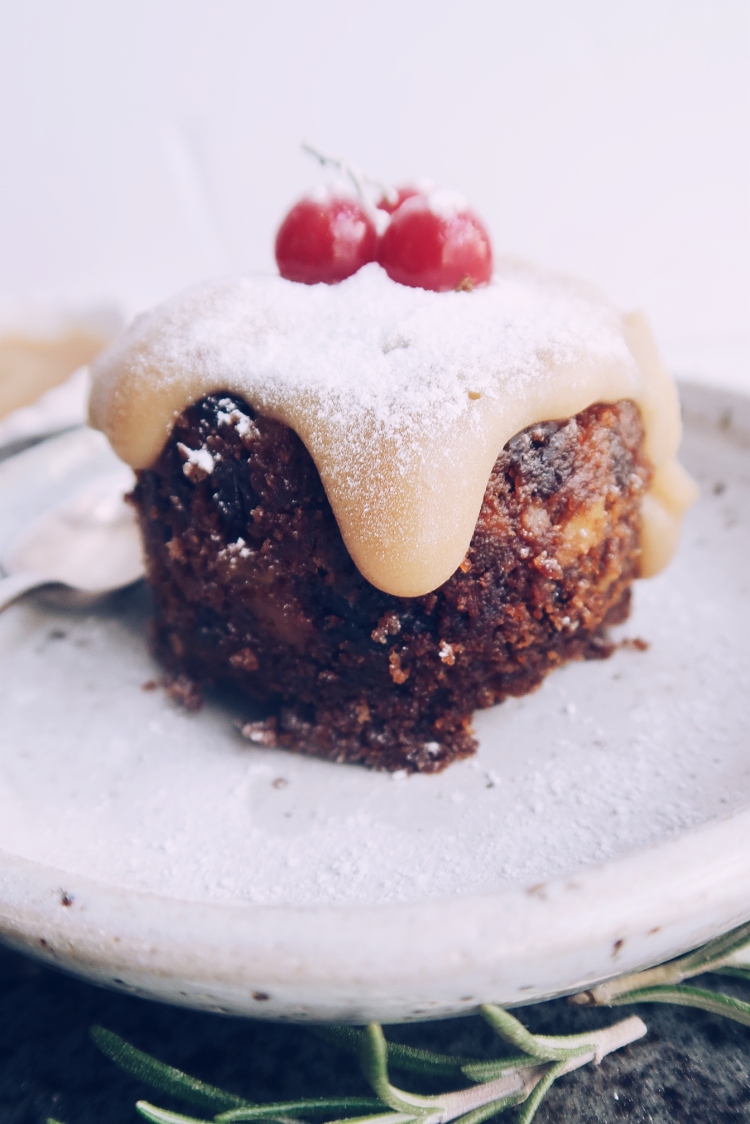 Preheat the oven to 180°C, gas mark 4. Grease 4 mini pudding basins and 4 small circles of baking parchment with the soya spread and set aside. Mix the flaxseed with 3 tablespoons of cold water and set aside for at least ten minutes, or until it becomes jelly-like and makes a ‘flax egg’.

Sift the self-raising flour, baking powder, salt, nutmeg, cinnamon and cloves into a medium mixing bowl, then add the flax egg and the melted coconut oil. Mix the treacle with the stout and rum in a measuring jug. Pour this mixture into the bowl and whisk everything together thoroughly. Stir in the lemon zest, apple, almonds, currants, peel, cherries and mincemeat.

Divide the mixture between the prepared basins and top each one with a circle of greased parchment. Wrap each basin in an 18cm square of foil and fold under the edges of the basins.

Place the basins into a roasting tin and pour in enough boiling water to come 2.5cm up the sides of the basins. Carefully place the tin in the oven and bake for 45-50 minutes, or until the puddings are springy and firm to the touch in the centre. Remove from the oven, unwrap, remove the parchment and leave to stand for 10 minutes. Carefully run a small knife around each one and turn out onto warm serving plates.

In the pictures above where I’m drizzling the brandy butter – it’s because I warmed it up first. Otherwise it will set firm like a regular brandy butter.